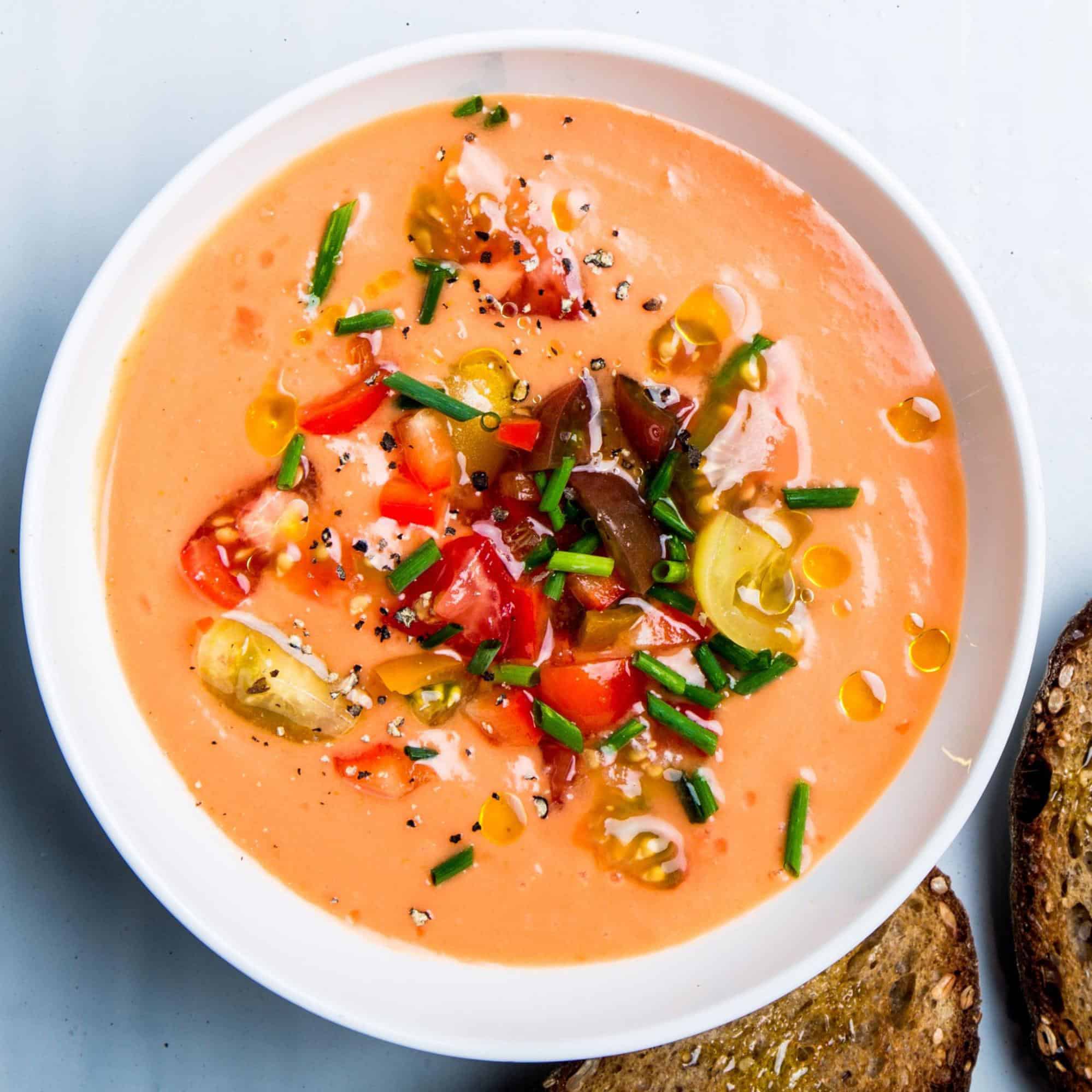 Gazpacho is mainly a Spanish dish. The word “gazpacho” means cold soup. It’s because when the soup was invented, the weather in Spain played an important role in the naming.

That’s why they added this cold soup to the cuisine. Like any other summer food, it won hearts. Thus the name summer gazpacho came.

But the history of it is way more ancient than it sounds. This dish is also mentioned in Greek and Roman literature. Though over time, the main recipe has been changed. Ingredients like green peppers have been added to modify the original recipe.

However, the added ingredients give the dish a modern touch. Moreover, its flavor has proven to satisfy the taste buds of thousands.

Now it’s time we reveal how to make this summer gazpacho.

We’ve mentioned all the ingredients. Now it’s your turn to bring them all. We suggest you collect fresh ingredients since there are no better alternatives.

However, you can also use frozen ones.

How to Make The Summer Gazpacho?- 6 Easy Steps!

Step 1 of 6: Peel off The Tomato Skin

Well, first, boil some water on the stove. And take the heirloom tomatoes. Then remove their core by cutting it out while keeping the tomato whole.

Then turn over the tomato and make a cross with a knife. The cross should be on the other side of the core. Now put the tomatoes in the boiling water. Wait for 5 minutes and take them out.

Now try to pinch on the crossed place. The skin will be loose there. Now pull the tomato skin from that place. The whole tomato will be peeled in no time. Do this for all the heirloom tomatoes. However, it’s not needed with cherry tomatoes.

Step 2 of 6: Cut The Vegetables

Start with cutting the peeled tomatoes. Chop them nicely. Do the same with cherry tomatoes, cucumber and onions as well.

Now take the bell pepper and remove its core. Then chop it finely like other veggies but keep the seeds. Then take the green onions and chop them as well.

Now you’ve prepared all the veggies. Let’s move to the next step.

Step 3 of 6: Mix Them All Together

Take a large bowl and put all the veggies here. Now add the minced garlic and coarse sea salt. Then add the black pepper powder and 2 tablespoons of olive oil.

Then mix all of them together. While mixing, try to use your hands. And add a little pressure. So that some juice comes out of the ingredients.

If you don’t want to use your hand, that’s also fine. Just use a spatula and gently press the ingredients while mixing.

Now, wrap the bowl with plastic wrap. And store it in the fridge for 20 minutes.

Step 4 of 6: Blend The Ingredients

Now take the bowl out of the fridge. And pour the ingredients into a blender. But keep a quarter of the mixture in the bowl and blend the rest. While doing so, add the red wine/ balsamic vinegar. Blend it to a smooth paste-like consistency.

Step 5 of 6: Chill The Gazpacho

Now take a strainer. And put it in the bowl where the leftover veggie mixture was. Then pour the blended mixture on the strainer.

Then the liquid will strain to the bowl. Now, mix the remaining veggies with the blended soup.

Step 6 of 6: Serve The Gazpacho

After that, take a ceramic bowl and pour the mixed soup there. Then pour 1 tablespoon of olive oil over the soup. Sprinkle some green onions over it. Then serve toasted bread with the gazpacho.

And your summer gazpacho is ready to eat!

So here are some questions that you might have. This will help you to have the best experience while having the summer gazpacho.

How Can I Enhance The Flavor of Gazpacho?

Try to chill the gazpacho for a longer period. For better taste do make it one day earlier. Then put it in the freezer. And serve it the next day.

This way in the cold, the flavors will have a chance to enhance further.

Is Gazpacho Good for A Vegan Diet?

Yes, Gazpacho is a good vegan option to try. It’s both a healthy and yummy dish.  Though it’s a vegan recipe, it’s enjoyed by both vegan and non-vegans.

How to Store Gazpacho?

For that, you have to store the ingredients in a Tupperware. Or you can store the leftover salad in an airtight glass bowl for 3 days.

You can even enjoy this Gazpacho later! But if you can’t resist yourself, blend it up already!

Savor The Taste Of Italy With Our Caprese Salad
Next Post: Taste Our Flavorful Vegan BBQ Teriyaki Tofu